skip to main | skip to sidebar

..the management
Posted by evan at 6:02 PM No comments:

i've speed bumped (or hump depending on the preferences of your local civil engineer) through the idea of posting as often as possible. it's a catch-22 of writing when trying to force the formation of an idea or thought. if you are successful in this post, it doesn't always have the feel of quality, spontaneous work and self-criticism is more prevalent than 3rd party feedback. if you are unsuccesful, it's like sitting on the toilet with the feeling of an impending genesis of sound and smell, only to wipe later and see blank space. you know you came to do something, the effort was made, but you know you'll be back in an hour giving it another try cause no one wants to hear a story about a fart since crap is king.

the cable channels tell us all the time that we're suckers. name brand name checks during cooking shows, traveling to exciting destinations like disney world or times square and making sure that each revision is the slightest bit different. my cooking knowledge comes from 25% learning from my parents (though dad is the cook) and watching them cook, the other 75% is watching food shows and reading. i'm far enough along that i considered a few culinary schools before epiphanizing on loving to cook, but no desire to do it professionally. so i watch the food channel (which has switched to a lifestyle network since the days before the chunky bitch with too many shows popped on), the travel channel and sometimes fine living or pbs.

the conclusion is that the same content is being reproduced at an alarming rate. consider how many blogs you read that talk about other blogs, reports on mainstream-media stories or just duplicate the newest press release so that the swag train stays local and you get a free bottle of rotgut. but you will pimp the fact that a marketing goon has made sure to fluffer that their triple-distillation, single-sourced clear liquor of the day is the most ultra premium beverage in this week's blogocycle. 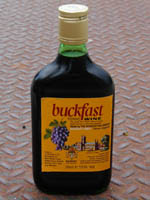 this has been spawned by a travel show's decision to show their viewers that pat's and geno's are in a heated battle for the king of steaks in their block of south philly. the program failed to note that every other fucking travel and food show that stops in philly does the exact same spot with the exact same guys slingin wizz and ribeye. they show you the same shots from inside the store, talk to the same guys wearing the same eagles sweatshirt and make sure you get to bust that nut at the end where the tease comes in..."which steak really is king of philly?"

well thank you christian girlfriend scared of the other rubes in the youth group. like every other show, YOU NEVER MAKE A FUCKING DECISION and tell me, with a smirk that says if i knew you outside of the show, you'd tell me with a very smug satisfaction that they are both...wait on it...good. this also tells me that you have no interest in receiving a public beating by rival beef factions over your decision.

content is being created at an alarming rate and if you don't think that i get the irony of this post, then my shirt is indeed wrinkled.

i have issue with Easter. I have an issue with most of the things that are done in jesus' name, especially when they are contrary to the basic tenets of being a joo. what's seemingly the holiest day of the christian year is celebrated with a ham or an entire roast pig if you get down like cubans. It's probably popular opinion that these kinds of thoughts never permeated those trembling under the eye of a thorny hatter. fuck all because the second that people forgot that jesus was in fact a jew, it all got real clouded (n. Big Boi re: cloudy piss). also drink in the remembrance of the last seder.

listening to: hieroglyphics - over time
Posted by evan at 5:43 PM No comments:

After too much blindness due to 305 affinity, I can't stand Rick Ross anymore. It was easy to get lulled into his nursery rhymes and love for rhyming phrases with themselves (but guess what? it was in a different context.)

Here's to Kimbo Slice becoming the next super hyped Miami guy making it big time. Check the grimy video of him fighting in a backyard. You know it's in South Florida because it just looks hot and the yard slopes into a canal.
i will get this blogger link to work.

Finally, I'd like to give Whole Foods a special shout out. You've recently been upped by 3000 in the Young Lloyd remix, which does have the good fortune of being backed by a surprisingly out of left sample. Also, your granola from the plastic dispenser is better than any cereal that isn't on Fruity Pebbles level. Any brand of cereal that considers the toy in the box to be a pedometer or helpful to the colon is easy bested. This time? Pumpkin seed flax hippie fart Delight. 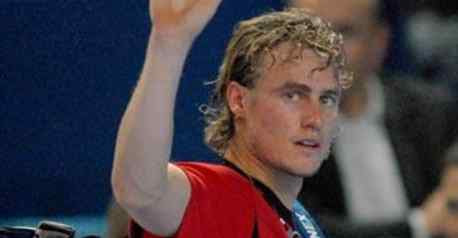 Borat will be the highest grossing DVD of the year.

Good that he's already dead because this would have killed him:

Depends, I think on whether or not you're from the West Coast Bay Area or anywhere else. What's dumb around here and most likely everywhere is getting worked up about the results of an online quiz. Like chick magazine quizzes, chain letter forwards and bible study youth group mailing lists, they're supposed to be fun, but damned if they aren't dumb.

Swatch Infinity
I would like the watch to my left which I found originally at Luxist. Watches are much more interesting to me lately, but I can't afford the ones that I would wear as they are more costly than my car. Also, it would be the only piece of jewelry that I wore.

I head to Miami tomorrow and bought a suit for the occasion. Tan check with light blue pinstripes (R/L).
Posted by evan at 5:17 PM No comments: 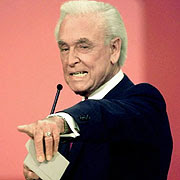 It's a universality that if one truly stays home sick from work (as I did for all of last week), there is only one show that you have to watch. The need is more holistic than anything, a feeling that you are completing part of the staying at home ritual. I can't imagine staying sick long enough that I would get bored of The Price as half the fun is watching Bob Barker going through the motions and getting genuinely upset every show.

What kind of rights does a contestant who is contiually getting fucked by the person picking ahead of them have in terms of payback? If the asshole with a home made shirt keeps topping you by a dollar and then gives a smug look, I say you should be able to lobby Bob or fake Rod Roddy for their spot at the big spin. No more strategizing and turning Contestant's Row into Survivor for the 42 minutes at 11 AM we all need to get better.

The rest of watching tv while sick tells you a great deal about who the advertisers and producers of shows believe is their most important audience. Do you flatulate often? Then you're probably at home during the day. Suffer from ailments of all orifices? Again, at home. Purchase the majority of products from commercials budgeted near $200? Enjoy that lump-sum settlement, my immobile friend. It's depressing and motivating enough to get most people off their sick asses and back to productivity.

I've never been mad at anyone who won the car.

Update - A contestant on the Showcase Showdown had a showcase containing some books, an appliance and a Chrysler 300. She bid $94,000.
Posted by evan at 11:17 AM No comments:

evan
I brought sexy back and got store credit.